Can Ozone Therapy Cause Air Hunger? 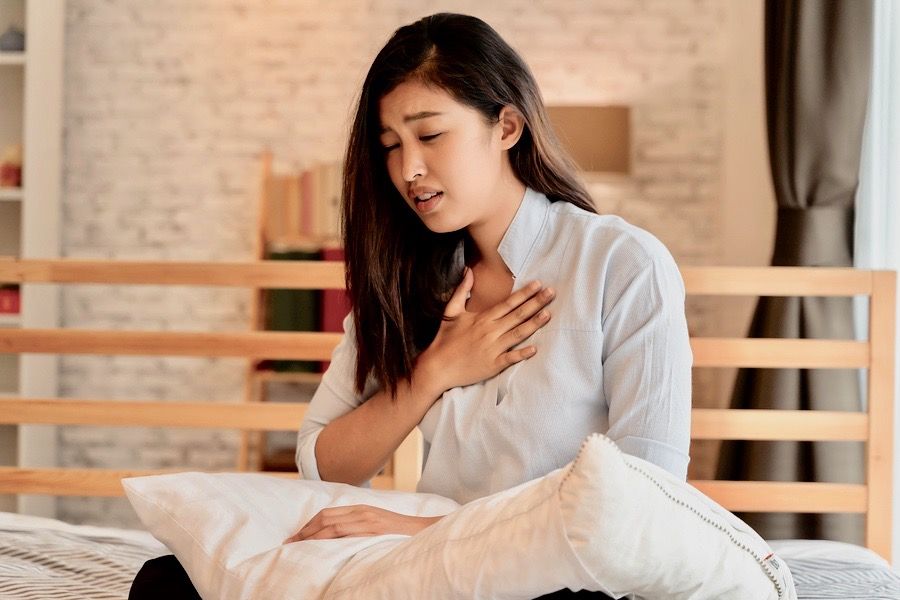 Some people who undergo ozone therapy start experiencing the disturbing sensation of air hunger. This is the feeling of not being able to breathe and some take it as evidence that ozone therapy is feeding Babesia infections. Is this what's going on or are other factors at play? And how often does this happen?

Yes, it has been observed that in rare cases ozone therapy can cause the sensation of “air hunger”. The reason for this has never been researched in a scientific manner, but there are different possible explanations: it could be a reaction to heparin, a Herxheimer response when clearing an infection, or because of an underlying structural problem.

How could ozone therapy have influence on a structural problem and what is heparin?

​Can heparin cause the sensation of air hunger?

Heparin is a drug which in most cases is very well tolerated, but it comes with a long collection of side-effects which most doctors are not aware of, as I have reported in the past.

It is often used in ozone therapy, especially whenever a so called “blood ozone” treatment is performed, so for example Major Autohemotherapy or the 10 Pass.

Heparin is an anticoagulant which means it prevents the blood from clotting and makes blood ozone procedures possible.

One of the long collection of adverse reactions are various respiratory problems, like “shortness of breath” or “trouble with breathing”. [1] 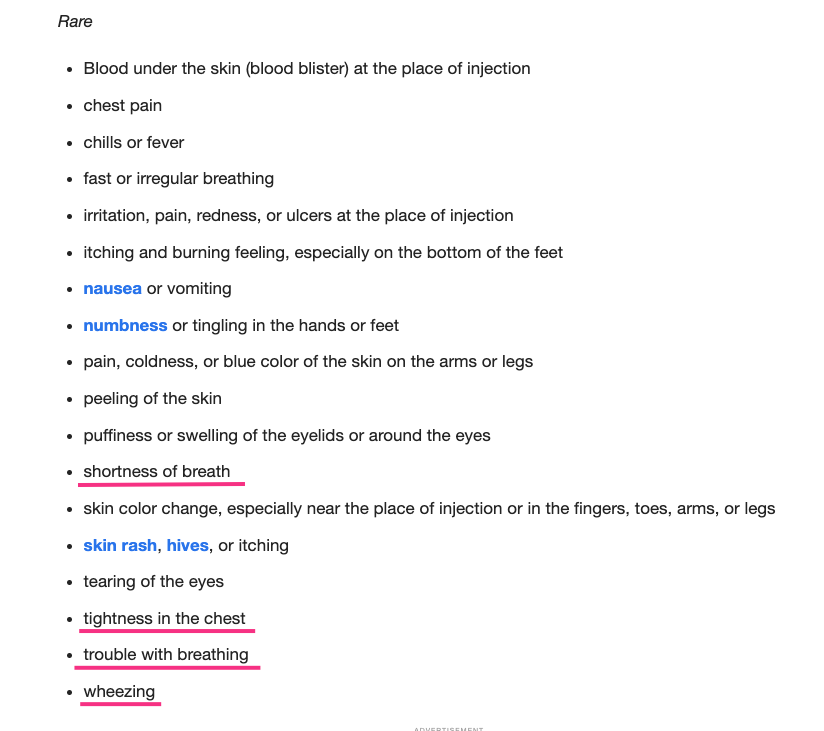 The above are just the rare side effects, you can find a complete list here.

The explanation why heparin would trigger symptoms which are often observed in asthma and allergies could be because it is believed to contain histamine [3]. Which is not surprising, given that it's an animal product made from pig parts [2].

Patients with histamine intolerance, or MCAS, mast cell activation syndrome, should be made aware of this.

So, yes breathing difficulties after heparin administration are known side-effects.

But this is not the only possible explanation for the occurrence of air hunger after ozone treatments.

Can air hunger be an ozone induced Herxheimer reaction?

Toxins produced by bacteria after they die can create a range of uncomfortable symptoms which often resemble the disease they caused. This process is called a Herxheimer reaction, or a healing crisis. [4]

Ozone is known to produce such a response.

During a healing crisis symptoms of the given condition can spike temporarily until the infection is cleared.

Which means that any type of respiratory problem like bronchitis, lung infection, or asthma could also produce air hunger during the elimination of that medical problem.

This is one possible explanation for the occurrence of this symptom after an ozone treatment.

She has been diagnosed with Mycoplasma pneumonia, a lung infection.

During the first three Major Autohemotherapy ozone therapy sessions, she reports that she was experiencing that specific sensation of shortness of breath.

This was accompanied by a cough which produced mucous.

Once that cleared, her lungs healed up completely. 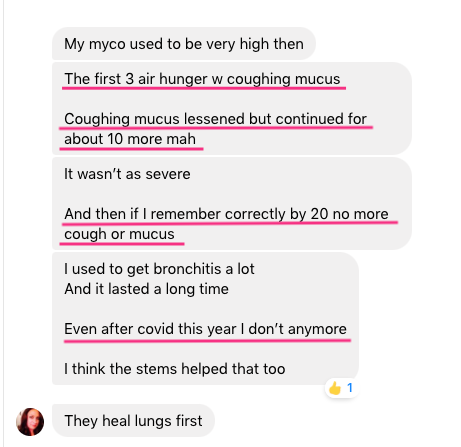 Given that air hunger is also a typical symptom of Babesia infections [20], it is possible that shortness of breath will temporarily increase while ozone is clearing the bacteria from the system .

Can air hunger be caused by structural problems?

Some of them can cause breathing problems.

Shortness of breath has been observed in people with spine problems. [9] [10]

Especially, problems with the neck vertebrae are known to produce lung symptoms, as can be observed in people with atlantoaxial instability [11] or craniocervical instability [12] but also with disc hernias.

A bulging disc in the C3-C5 section can impinge on the phrenic nerve which is responsible for the proper function of the diaphragm. [8]

But also lower level cervical discs can have an impact on lung function. [7]

One of Jennifer Brea's most disturbing symptoms was the cessation of breathing whenever she lied down her head. [13]

This resolved after she underwent spinal fusion surgery.

Jeffrey Wood had a similar issue. [14] He was also diagnosed with an instability of the top vertebrae and he says that one of his symptoms was the sensation that his body seemed to “forget to breathe” whenever his head was in a certain position.

Why would cervical instabilities cause the feeling of not being able to catch a breath?

Because the part of our brain which controls breathing, the brain stem, sits at the bottom of the skull, just where the neck starts.

If the lungs have been found to be healthy, it can make sense to look for structural problems as the underlying cause for air hunger, especially if they are accompanied by symptoms like dizziness, fatigue, brain fog, inability to think, strange crawling or tingling sensations in the arms, hands, tinnitus,  headaches, and neck pain.

Could ozone therapy fix them? 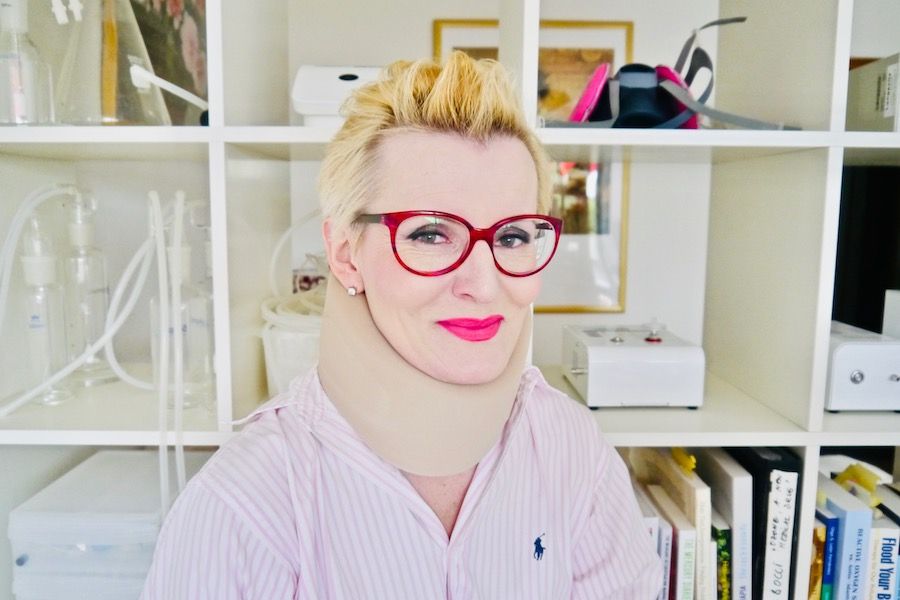 My own experience with cervical instabilities has sensitized me to the issue of ozone therapy's possible impact on structural problems.

How could ozone therapy have an impact on structural problems?

A possible effect of ozone therapy on spinal instabilities has never been researched as far as I know, so everything you read here are just my speculations based on my own experience and anecdotal observations.

Here is what may be happening when ozone therapy is used on spinal instabilities: I believe ozone may lead to a relaxation of muscles.

Why is this significant for people with spinal instabilities? Because whenever there is looseness in the spine, the body tries to compensate by contracting muscles in that area to re-establish stability. [15]

Relaxing muscles with the help of ozone treatments could make symptoms of spinal instabilities worse, including the sensation of air hunger.

I have experienced this from doing ear and vaginal insufflations, even more so during ozone saunas, but also after taking magnesium, an effective muscle relaxant.

But, it gets a bit more complicated, since in some people the painfully contracted muscles can actually benefit from the relaxing effect of ozone.

In such a case, the impingement on critical neurological areas which produce the air hunger will be lessened and the person feels better after an ozone treatment.

This could explain why ozone therapy appears to make symptoms of structural problems sometimes better, and sometimes worse. 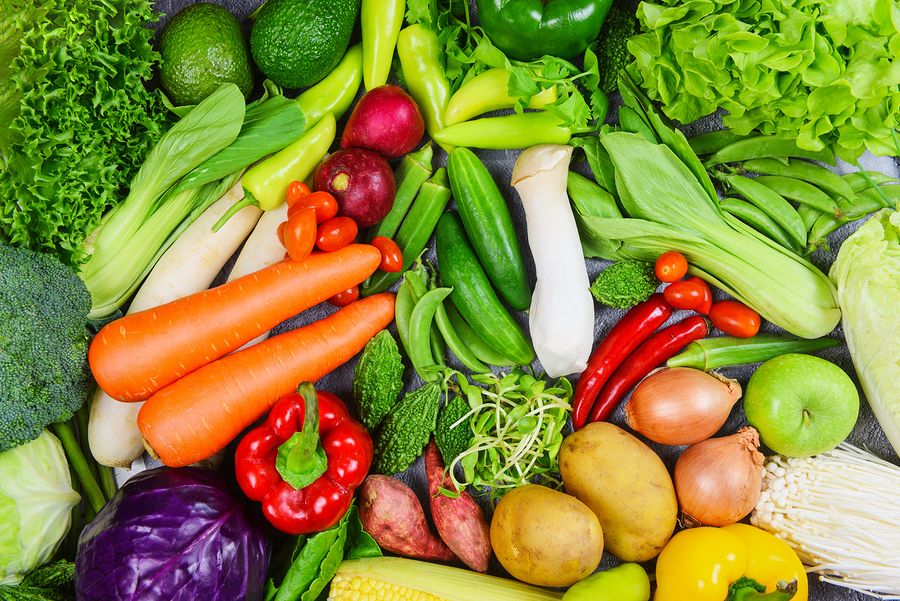 Many foods which are regarded as healthy contain many oxalates. Carrots, beets, char, spinach, nuts, rhubarb, and many more, contain a high amount of those tiny crystals. They are deposited in joints and cause calcifications which can cause painful structural problems.

Oxalates are tiny crystals which we take in through foods and which can damage our joints and ligaments and lead to calcifications. [16]

I speculate that ozone therapy is able to help purge oxalates. This movement of the crystals could be causing a spike in structurally induced symptoms.

Another possibility are infections as the underlying cause for structural instabilities.

We know that atlantoaxial subluxations in children can be caused by certain respiratory infections. [17]

Tubercullosis is known to cause deterioration of the cervical vertebrae and consequently instabilities in that area. [18]

Are there other pathogens which can lead to damage of the vertebrae or the ligaments in the neck that we don't know about?

Maybe Babesia, Lyme, and Bartonella can cause a similar structural damage? Neck pain is a known symptom observed in Lyme disease patients and many symptoms which are ascribed to tick born infections match those of cervical instabilities. [21]

Have you ever experienced symptoms like air hunger, dizziness, neck or head pain, strange crawling sensations in your body? Let me know in the comments below.

[6] How Your Neck Pain May Affect Your Breathing https://www.spineuniverse.com/conditions/neck-pain/how-your-neck-pain-may-affect-your-breathing

[10] What Causes Back Pain and Shortness of Breath? https://www.spine-health.com/blog/what-causes-back-pain-and-shortness-breath

[14] The MEchanical Basis of ME/CFS https://www.mechanicalbasis.org/#

[16] Vascular Calcification and Stone Disease: A New Look towards the Mechanism https://www.ncbi.nlm.nih.gov/pmc/articles/PMC4501032/

[20] Everything You Should Know About Babesia https://www.healthline.com/health/babesia

The way ozone therapy is used these days, it's often doomed to fail. Let me help you out figure out what is the right and what is the wrong approach for your situation.

Let's figure it out!