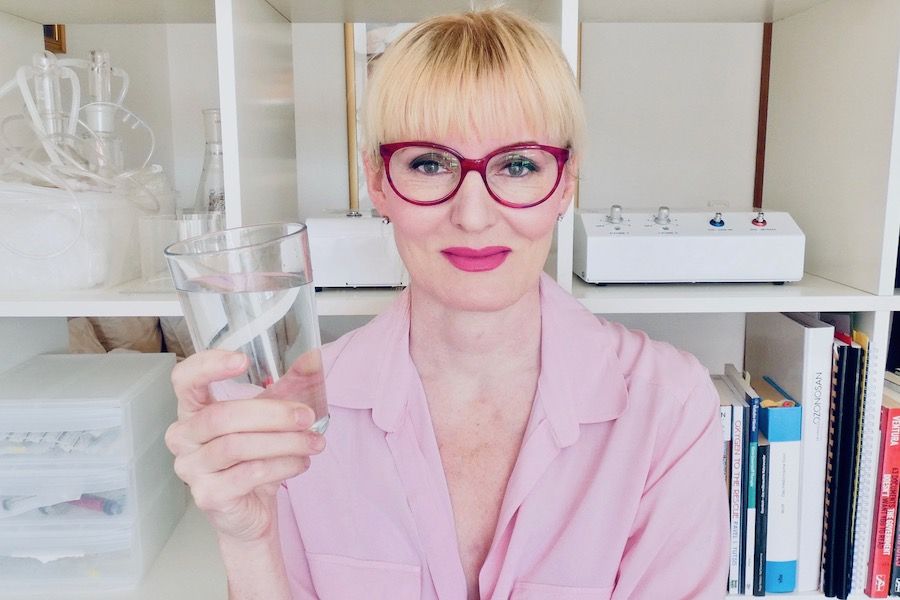 I’ve drunk oceans of ozonated water in my life, and just like many I’ve been wondering what this could have done to my gut biome. The gut flora plays an important role for our overall health, it appears. Ozone on the other hand is one of the most potent antibacterial agents that we know. Could drinking ozonated water kill some of our precious gut bacteria?

As it turns out, this is highly unlikely. Although no studies exist on the subject of ozonated water and gut bacteria, we know that the small intestine is largely devoid of bacteria in a healthy human being. But that’s where ozonated water goes when ingested. It does not reach the big intestine where the beneficial bacteria reside.

Allow me to walk you through the research:

​Where Does Good Bacteria Reside?

The human intestine is made of two parts: the small and the large intestine.

When we ingest foods or liquids they first land in the stomach and then in the small intestine. A few hours later they make it to the large intestine.

The small intestine contains as good as no bacteria in a healthy human being. It is mostly sterile. [3] [4]

The presence of bacteria in the small intestine is a medical condition called SIBO, small intestinal bacterial overgrowth, and is conventionally treated with antibiotics to kill the bacteria which shouldn’t be there in the first place. [5]

The reverse situation is true for the large intestine. There, digestion happens mostly thanks to fermentation. This requires a lot of bacteria. [6]

Why are there no good bacteria in the small intestine?

There are two main mechanisms which guarantee that the small intestine remains as poor in gut bacteria as possible in a healthy human being: hydrochloric acid which is produced in the stomach and the ileoceal valve.

The secretions of our stomach have one of the lowest pH levels of any mammals, comparable only to other carnivores like cats and dogs. It ranges between a pH of 1.5 and 3.5. [9]

Not many bacteria can survive that.

Which is the whole point. It’s a type of protective barrier from dangerous pathogens.

A malfunctioning ileocecal valve can lead to – you guessed it: small intestinal bacterial overgrowth, SIBO. [10] [11]

So the bottom line is: lots of bacteria in the large intestine means you have a healthy digestion.

Lots of bacteria in the small intestine, on the other hand, means trouble. 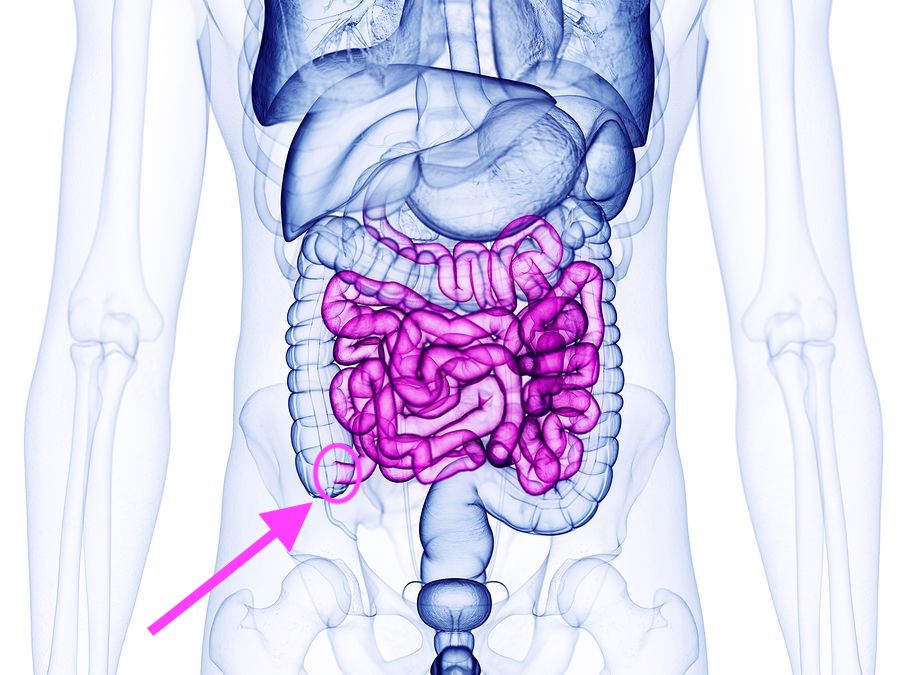 The pink part, that's the small intestine. Although it's called small it's actually longer than the large intestine. The small intestine is where the ozonated water lands that we drink. This part of our digestion is nearly devoid of beneficial gut bacteria. The arrow points towards where the ileocecal valve is located.

But that's exactly where ozonated water goes after you drink it: into the small intestine.

Where, as we just learned, there are not supposed to be many bacteria.

So even if the ozone in the water ends up killing some stuff – the better! Because those buggers are not meant to be there to begin with.

You may ask yourself though: could the water reach the good bacteria in the large intestine and do some damage there?

Unlikely, here is why:

The gastric juices are made by the stomach, the small intestine, the pancreas and the liver. Every day around 2 quarts (1.2 to 1.5 L) of fluids are produced. [2]

The ozonated water you drink would have to traverse all that before reaching the large intestine.

Keep in mind that ozone is highly reactive. So after traveling through 22 feet intestinal tissue filled with gastric juices, it's unlikely that the water would contain any ozone anymore. 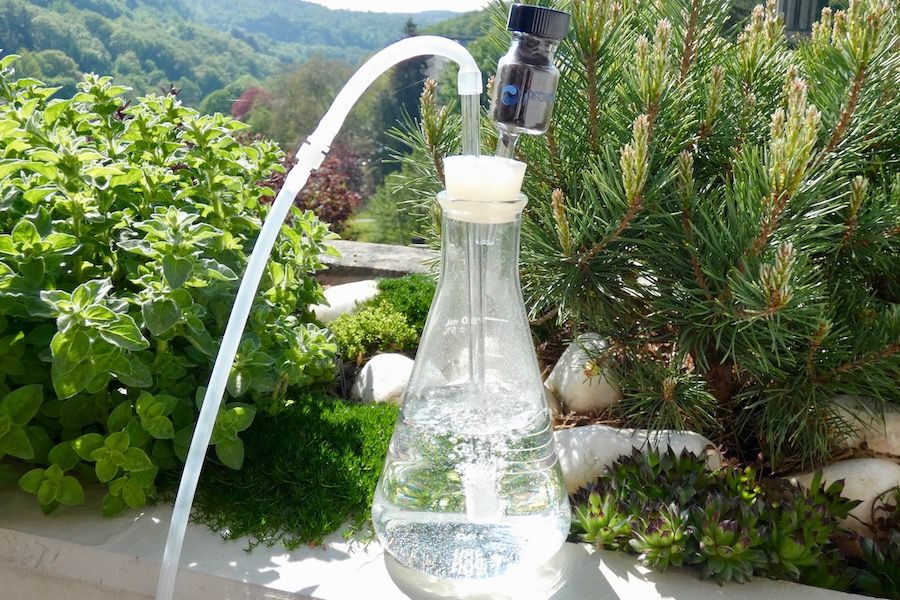 ​Are there studies about the effect of drinking ozonated water on the gut biome?

There are some studies which deal with drinking ozonated water and human gut health. None of them have looked at the gut biome though, only at one bacteria: helicobacter pylori.

On top of that they suffer from what most studies in medicine suffer: a bad study design, a massive conflict of interest, or a misleading representations of their results.

Here is what we got:

1. 132 patients who were all diagnosed with a helicobacer pylori infection were divided in four different groups, depending on whether they were suffering from gastritis or ulcers. [12]

All groups were treated with antibiotics. The two ulcer groups were also given ozonated water to drink.

Unfortunately, since there was no “ozone water only” group, we don’t know what effect the drinking of ozonated water alone would have had on the outcomes.

When reading the paper, it becomes clear that the study contains a profoundly nonsensical study design, typos, strangely omits the use of antibiotics in the study title (although all study participants received them), that it does not have a valid control group, and that it draws misleading conclusions.

2. A short abstract on pubmed cites a Russian study where patients with helicobacter pylori and gastroduodenal pathology were given either ozonated saline IVs, or ozonated water to drink, or both. [13]

The study came to the conclusion that all forms of ozone administration were effective in decreasing symptoms, but that the combination of the two treatments proved to be the most effective.

Unfortunately, the whole study text is not accessible, so it’s difficult to verify those claims.

3. Another study from Italy claims to show that drinking ozonated water and doing rectal insufflations actually improved the gut biome. [15]

After reading the study text, it becomes clear that the study could not have possibly come to that conclusion, since the study designers never tested the gut biome of the study participants. Neither before nor after the study.

What it did show is that many digestive symptoms like bloating, gas, abdominal pain, even bad breath, and diarrhea or constipation improved.

And the effect may have been mostly from the rectal insufflations, not so much from the ozonated water.

We don’t know, because of another unfortunate study design.

In addition, the study suffers from a massive conflict of interest with both study designers being practicing ozone doctors who likely picked the study participants from their patient pool.

4. A rat study confirms that ozonated water reduces helicobacter pylori bacteria in the stomach of mice. [14]

So, none of the studies looked at the impact of drinking ozonated water on the good gut bacteria.

But it may be that ingesting ozone water could help eradicate helicobacter pylori. Which may help reestablish a healthy digestion.

In that sense: cheers!

What experience have you made with drinking ozonated water? Let me know in the comments below.

[4] Microflora of the human small intestine.

[5] Everything You Should Know About Small Intestinal Bacterial Overgrowth (SIBO)

“The ileocecal sphincter provides a mechanical barrier to bacterial migration into the small intestine but also assists in regulating the exit of fluid and nutrients into the colon. Furthermore, loss of this functional barrier predisposes the host to bacterial sepsis, even though it probably does not influence the ultimate goal of achieving full enteral feeding.55 As mentioned, loss of the ileocecal sphincter can lead to small bowel bacterial overgrowth, a condition associated with diarrhea and fat and vitamin (B12) malabsorption, both resulting from bile salt deconjugation, along with fluid loss, abdominal cramps, and liver injury.56” https://www.sciencedirect.com/topics/medicine-and-dentistry/ileocecal-valve

Does Rectal Ozone Kill Good Bacteria in the Gut?