Ozone Therapy and Coffee Enema: Can You Combine the Two? 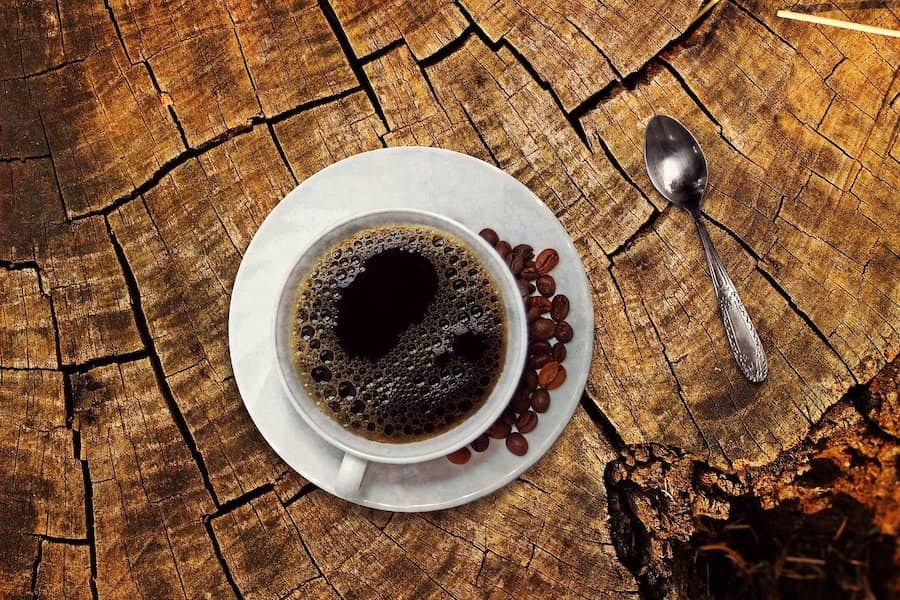 Although no studies have ever been performed on the topic, current clinical practice allows for the assumption that glutathione can counteract effects of ozone therapy. Given that both drinking coffee and coffee enemas have been shown to increase glutathione levels, it may be best to space them apart from ozone therapy.

I don't know about you, but to me this came as a surprise. So, finish up your cup of coffee and let’s get to the bottom of this, pun intended.

Coffee enemas are hailed as an excellent way to boost glutathione, a potent antioxidant. So the understandable concern among users of ozone treatments is that the elevated glutathione levels could counteract the effect of the beneficial pro-oxidants created during ozone therapy.

But does this really happen? Are coffee enemas able to stimulate glutathione production?

Indeed, that's what seems to be happening.

There are two studies which show that both drinking coffee as well as coffee enemas can increase the glutathione production by around 16 to 20%.

Find the best ozone generator to shoot ozone up your “you know what”: read the guide on how to buy ozone equipment for home use.

One study was performed in Italy and showed that drinking coffee resulted in increased serum glutathione levels by up to 16% when compared to the same participants during a coffee free week.

But: the participants consumed mostly espresso. This type of coffee consist of only one ounce of beverage with consequently significantly lower total amounts of caffeine and other antioxidants when compared with standard drip coffee servings.

Which means the glutathione stimulating effect could be potentially even greater among people who consume Starbucks sized coffee servings. 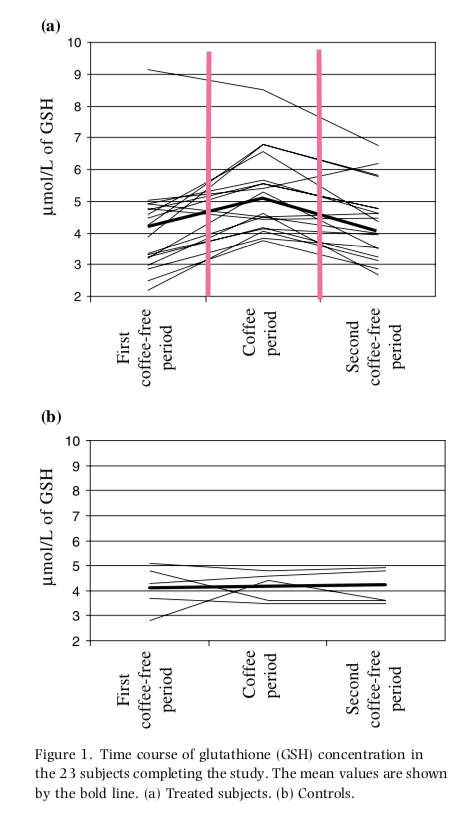 The spike in the above graph with the two vertical pink lines (added by me) shows an increase in serum glutathione by around 16% among study participants who drank 5 espressos or mokas per day.

Study number two compared the glutathione levels in people who either drank two cups of coffee per day or did coffee enemas three times a week. 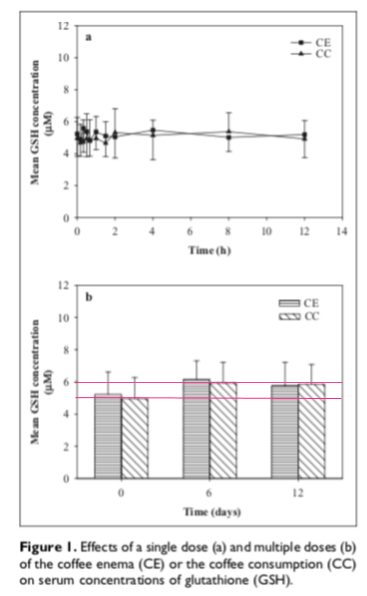 The two horizontal pink lines have been added by me. They show a distinct increase between day 0 and days 6 and 12 for the two groups. This shows that both coffee enemas and drinking coffee is able to raise the glutathione levels by around 20%.

Although the study came to the conclusion that there were no significant differences in glutathione levels between the two different forms of coffee administration, there is a clear increase visible between the start of the experiment (day 0) and days 6 and 12.

The growth (difference between the two horizontal pink lines) amounts to around 1 uM, or 20% (= 1/5 uM). This supports the results of the Italian study which found an increase of 16%. 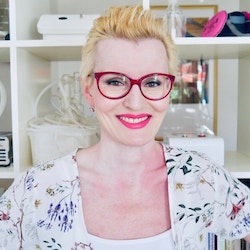 I show people how to use ozone therapy in the most effective way to achieve maximum results.

Save time and money on your way to recovery, and become your own expert.

I show people how to use ozone therapy in the most effective way to achieve maximum results.

So, we know that either drinking coffee or doing coffee enemas can result in increased glutathione levels by 16% to 20%.

What we don't know is whether this has an impact on the outcomes of ozone therapy, since there is no such study to consult.

Why does it nevertheless make sense to assume that consuming coffee could counteract the effects of ozone?

Because ozone treatments work through the production of beneficial oxygen radicals like hydrogen peroxide, lipid oxidation byproducts, and singlet oxygen ions. All of which can be negated by various antioxidants including glutathione.

Ozone's byproducts, when introduced into the human body, interact with glutathione (GSH) which then turns into the oxidized version of glutathione, GSSG.

This interaction is so well established that the change in different forms of glutathione is used as a marker of oxidative stress: the less GSH there is, the more oxidative stress and vice versa.

So, there is a well documented counteraction between glutathione and oxidative molecules which is also utilized in clinical practice.

Some ozone doctors successfully use glutathione to neutralize the damaging effect of ozone on veins: a quick GSH push close to a DIV ozone injection will reliably reduce the risk of vein inflammation.

Other ozone doctors apply glutathione IVs right after an ozone treatment to reduce the incidence of an ozone induced die-off reaction.

Consequently, it makes sense to assume that an increase in GSH levels due to coffee (whichever way around it's introduced) could negate the effect of ozone therapy.

Should a coffee enema and ozone therapy be spaced apart?

As we've seen, coffee taken from the rear or from the front is able to increase glutathione levels.

But that's not the only antioxidant we're dealing with here: there is also caffestol, trigonelline, chlorogenic acid, hydrocinnamic acid, malanoidins, quinine, and of course caffeine.

Caffeine is one of the most abundant and most potent antioxidants and its ROS scavenging properties have been sufficiently proven in in vitro studies. It is also absorbed by the intestinal walls during coffee enemas.

Taken all this into consideration, I believe that yes, it’s best to space apart any type of coffee administration from ozone therapy, if you want to experience a maximum effect from the ozone treatment.

If you don't space them apart, you will in all likelihood still experience benefits from the ozone treatment, but maybe not to the same degree as if you did allow for more time to pass between the two interventions. 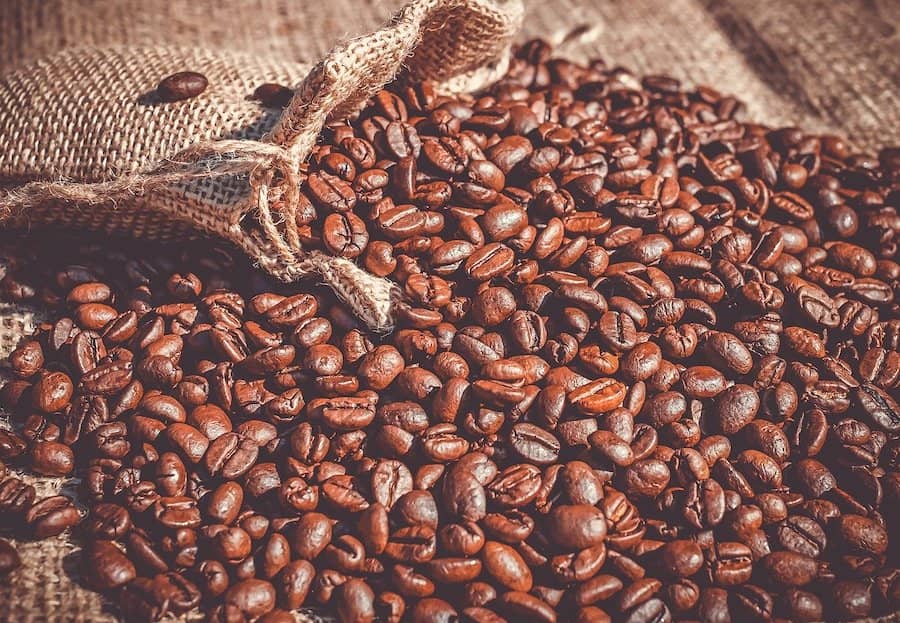 Should coffee enemas be done before or after rectal ozone insufflations?

Many people like to do coffee enemas before rectal ozone insufflations: they use them to clean out the colon and so to increase the ozone absorption.

Based on the above described antioxidant properties, I do not recommend doing coffee enemas in close proximity with any type of ozone treatments, but especially not before a rectal ozone insufflation.

Apart from the antioxidant problem, another issue may be the leftovers of coffee in the colon. Ozone is able to react with anything it encounters and create unknown by-products which could cause pain, cramps, gas, and bloating. Introducing ozone into the colon right after a coffee enema could result in such a situation.

In my opinion it’s better to do it the other way around: first the ozone and at least an hour later, the coffee enema.

Let's talk – over a virtual coffee. It's on you, though!