Vaginal ozone insufflations are an often overlooked, but extremely effective home ozone treatment. As the reports on this page show, they were able to help women with such conditions like cervical or uterine cancer, infections, or rheumatoid arthritis.

Although they’re mainly a local treatment, judging from personal experience and what has been relaid by others, I believe that they can also have a significant systemic effect.

(Keep in mind that those are subjective stories which may be missing vital information about what the patients did besides vaginal ozone insufflations which may have contributed in a significant way to their recovery. Many, probably most of them, used more than just ozone treatments.)

Ramona was diagnosed with cervical cancer at the end of 2019. At that point she was bleeding nearly every day. Instead of undergoing invasive conventional diagnostics and treatments, she decided to continue with her meat based diet, pancreatic enzymes, lots of other supplements, and daily vaginal ozone insufflations which she started at the end of 2019.

The result were continuously fewer days where bleeding occurred until finally in April of 2020 she was completely free of symptoms.

You can watch or read her vaginal ozone testimonial in full. 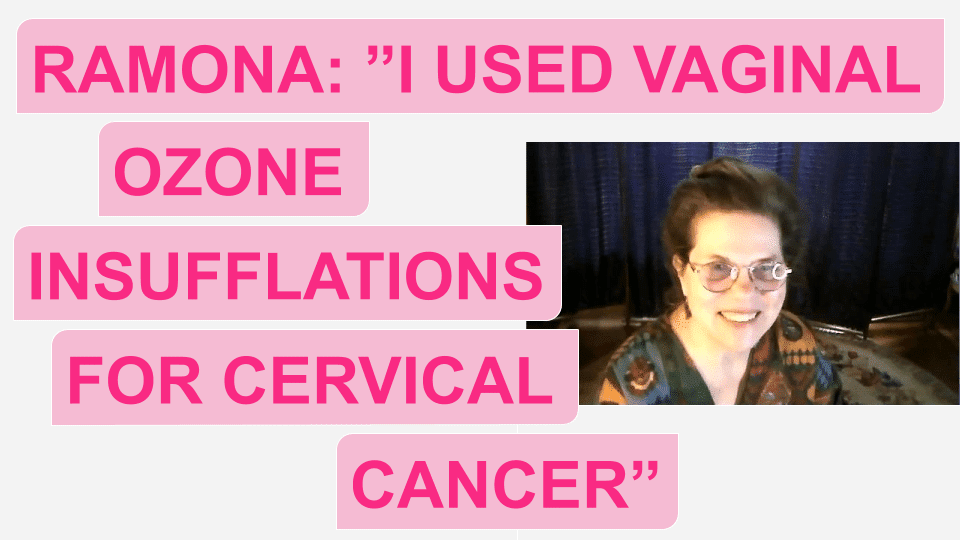 Jody Mitch reports about a patient who was suffering from ureaplasma infection for around one year. Conventional and alternative treatments (antibiotics and homeopathics) did not help. 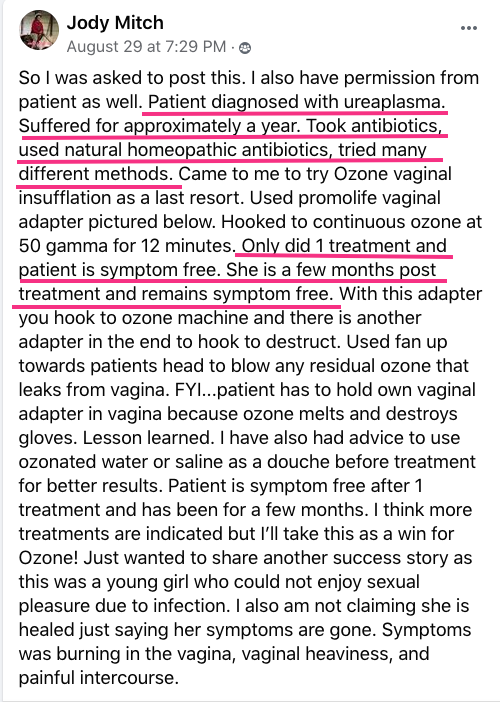 Shanti shared her testimonial with vaginal ozone insufflations which she believes contributed to her successfully shrinking her cancer by 95%. 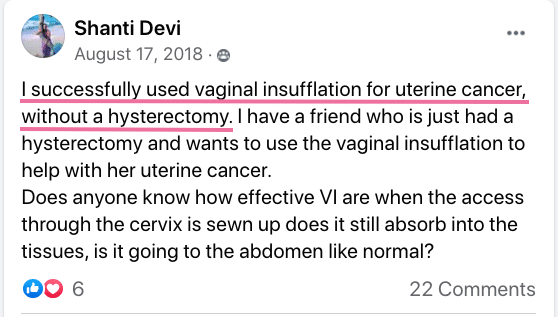 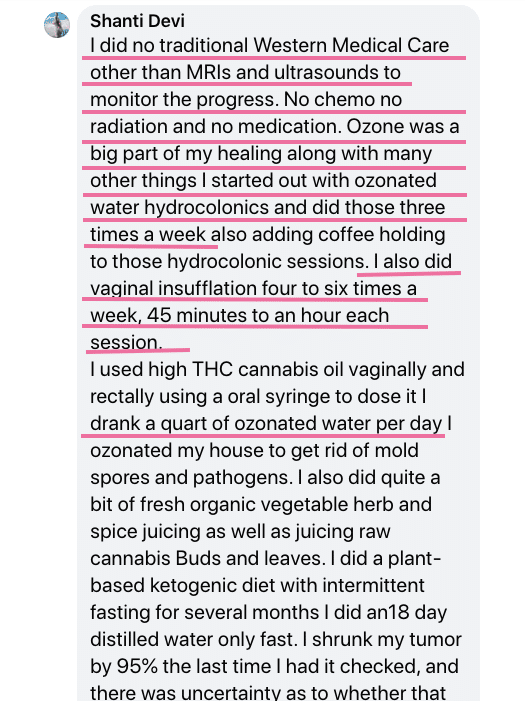 You can read the entire thread here.

Another ozone group member reported about her success with vaginal and rectal ozone insufflations and how they helped her shrink or completely eliminate tumors on adrenals and kidneys. 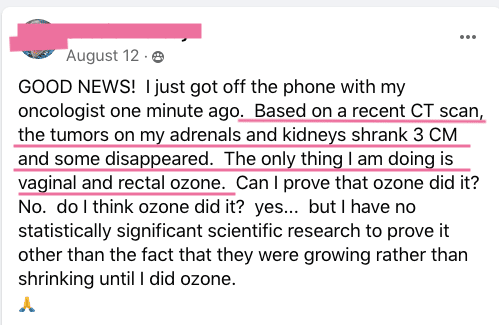 ​Read the thread in full here.

It must have been around 2017 when I started developing a pain in my lower right abdomen. I was convinced that it was appendicitis but I did not want to have it removed surgically, so I started looking for alternative means to treat it.

I came across information from over 100 years ago, according to which a medical doctor successfully resolved several cases of late stage appendicitis by putting his patients on a water fast.

I decided to do the same. I ended up water fasting for 28 days, and ate solid food after a total of 32 days or so.

The moment I broke my fast with some juice on the 29th day, the pain came back. The fast turned out to be have been completely useless in resolving the pain.

After a stint at the emergency room (my heart rate had gone down to 40) where I was thoroughly examined, it was determined that I definitely did not have appendicitis. The doctors could not tell me what the abdominal pain was due to, but they could safely exclude appendicitis and recommended I visit a gynecologist.

I never did that, I never went to a gynecologist, but instead decided to treat myself with vaginal ozone insufflations, since the pain persisted and got worse after each meal.

After the first vaginal insufflation my belly swelled up so that I looked as if I was at least 6 months pregnant, but the abdominal pain got less.

Being convinced that the bloating was a sign that the ozone was resolving the problem (whatever it was), together with the diminished pain, I continued with the vaginal insufflations.

The bloating got worse and the pain got better after each vaginal treatment.

After around 2 weeks the vaginal insufflations no longer triggered any bloating and the pain was gone and stayed gone (apart from some minor flares maybe twice a year or so which then completely stopped probably 6 yeas ago).

To this day I don’t know what this pain was due to, whether it had anything to do with my ovaries, or possibly the ileocecal valve, or maybe it was an appendicitis which was never properly diagnosed.

Whatever it was, vaginal ozone insufflations fixed it.

Heather is a veterinarian and has seen great results in weight loss, managing RA and neck crunchiness: 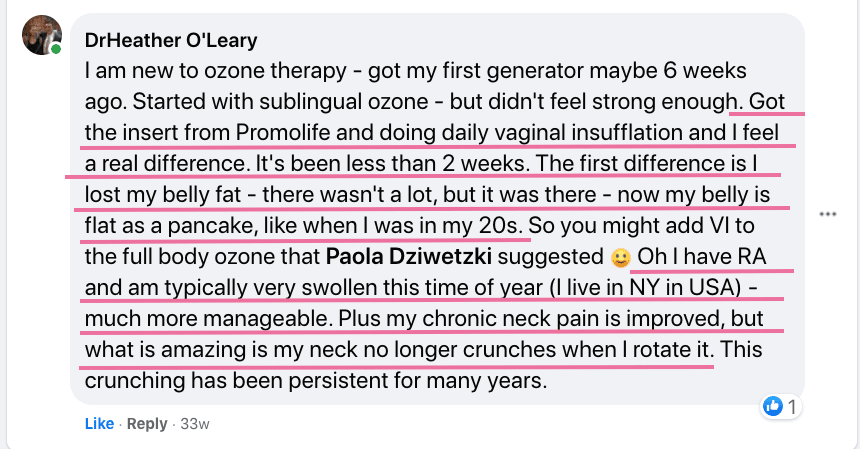 Joyce manages her knee, sciatica, and lower back pain with vaginal insufflations

Joyce discovered that vaginal ozone insufflations work as a great alternative to ozone injections to help her successfully manage pain in her knee, sciatica, and lower back pain. This is a great example of the powerful systemic effect of vaginal insufflations. 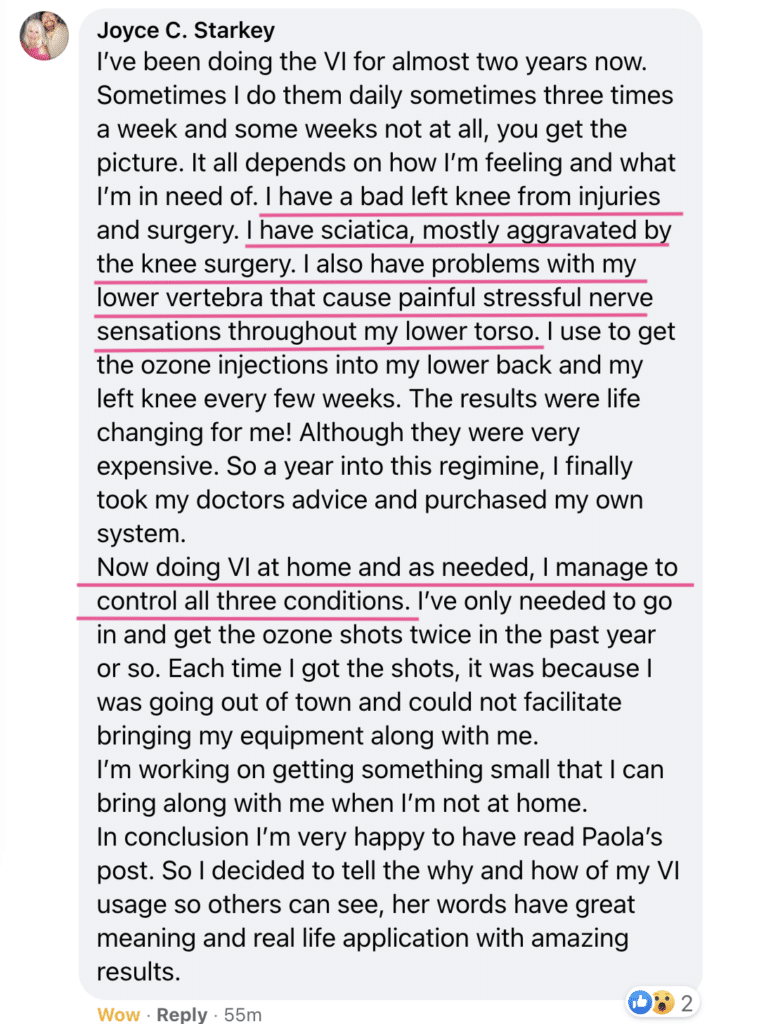