Can Ozone Therapy Cause A Herxheimer Reaction? 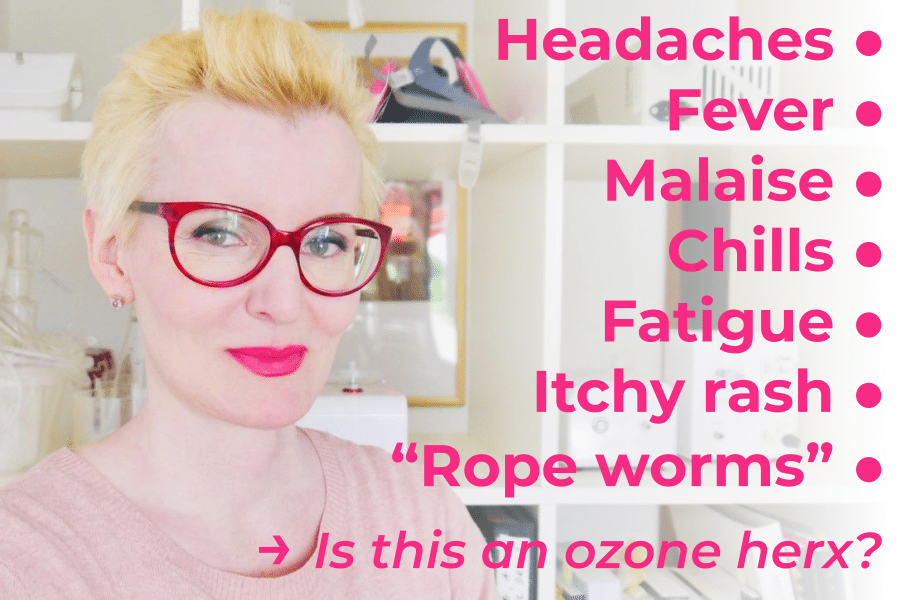 The idea that ozone therapy can cause a Herxheimer reaction is one of the most discussed topics in the ozone community. Yet, there is as good as no mention of it in the professional literature. So, is this a real thing or just an urban myth?

It is a real thing: ozone therapy can cause very distinct Herxheimer reactions. It is an often observed, but little researched phenomenon. Non-invasive ozone treatments tend to have a higher risk of Herxheimer reactions than invasive (ozone IVs) ones.

And in fact, given that ozone is a broad spectrum anti-microbial, it shouldn’t come as a surprise that ozone therapy can produce strong die-off reactions.

What is a Herxheimer reaction?

They noticed that after the patients were given an anti-microbial, they would often get worse first before eventually getting better.

Since then, this event has been observed with Lyme and other spirochetal and bacterial infections, but is also believed to occur in fungal and protozoan (parasitic) infestations [2].

The underlying mechanism is still a matter of speculation, but it's assumed that it's due to lipoproteins, so toxins and debris which are produced by the dying pathogens. These can trigger an inflammatory reaction. It is believed that this inflammatory process causes the Herxheimer reaction.

A Herxheimer reaction is also called a herx, a healing crisis, a die-off, or a detox reaction. It's also often used as a verb, e.g. “I'm herxing every time I do an ozone treatment”.

Many ozone users as well as some ozone practitioners believe that any type of infection can trigger a herx during an ozone course, including viruses. Dr. David Brownstein, an ozone doctor, believes that even anti-cancer treatments can cause Herxheimer reactions [3].

In general, herxing is regarded as a sign that the ozone treatment works.

The Power of Ozone Shop

How does an ozone therapy induced Herxheimer feel like?

Which means that ozone therapy can trigger the following typical die-off symptoms [1] [4]:

In addition, there are Herxheimer reactions which seem to be specific for certain non-invasive (those which do not require the puncturing of the skin) ozone treatments, like:

How likely is a Herxheimer reaction after an ozone treatment?

Based on observations among ozone users and ozone therapists, the likelihood of a herx after an ozone treatment depends on a number of factors:

– In general, intravenous (invasive) ozone treatments show a lower risk of a healing crisis than those which do not require the puncturing of the skin (non-invasive). A complication of ozone IVs is that many require heparin, an anti-coagulant which comes with a long list of side effects [5] which may be mistaken for an ozone induced Herxheimer reaction.

– How sick is the patient? The higher the pathogenic load, the more severe the Herx can be.

– How well can the patient deal with the herx? Is it an older, or a younger patient? What underlying conditions are there? Are the elimination pathways functioning well or are they impaired? The healthier the patient is and the better his body functions, the less likely it is that it will be overwhelmed by a die-off reaction.

Which ozone treatments are the most likely to cause a Herxheimer reaction?

Certain ozone treatments have a very high risk of side effects. Those are, roughly from highest to lowest (this is a very subjective and not an exhaustive list):

– Ear insufflations. In my estimate, 9 out of 10 patients will experience pain, itchiness, liquid discharge, scabbing and more after ear insufflations. This may start with the very first EI or it can take several weeks.

– Ozone saunas. Here, as well, in my opinion, 9 out of 10 patients will experience an extremely itchy rash if the saunas are performed often and frequently enough.

– Rectal insufflations. Around 7 out of 10 people will experience bloating, cramps, rope worm / mucous like stools, or sandy stools, although it’s not clear whether this is a die-off reaction or simply a side effect.

– Drinking ozonated water: 3 out of 10 people will experience side effects like nausea, cramps, vomiting, spitting out phlegm, pain, diarrhea, or constipation.

According to Dr. David Brownstein around 1 to 5% of his patients experiences a Herxheimer reaction after ozone treatments, although he does not specify the type of ozone methods this applies to. [3]

How can you deal with an ozone herx?

There are many different ways to deal with an ozone induced Herxheimer reaction, like supplements, anti-oxidants, binders, or anti-inflammatory medication or interventions.

Most people try to manage symptoms of an ozone herx by reducing either the frequency, ozone amount, ozone concentration, or duration of the ozone treatments, or a combination of those factors.

There is also the approach of using more ozone to to deal with an ozone induced Herxheimer reaction. This is an unusual approach which nevertheless has served me many times over the past 12 years.

Ozone induced herxes are believed to be caused by an activation of dormant pathogens or a flushing out of toxins from tissues. Once this process begins and starts causing problems by triggering inflammation, more ozone can often resolve them.

What do ozone experts say about Herxheimer reactions after ozone therapy?

Although Herxheimer reactions are one of the most discussed topics in the ozone community, it’s nearly completely absent from professional literature.

Neither Prof. Bocci, Dr. Viebahn-Hänsler, or Dr. Shallenberger, Dr. Dehmlow, nor Dr. Hand Wolff discuss it in their books.

It is also not referenced a single time in the “Madrid Declaration on Ozone Therapy”, which many regard as the most important ozone therapy guide.

The only ozone doctor I am aware of who mentions it is Dr. David Brownstein in his book “Ozone, the Miracle Therapy”.

There, he presents the case of Miranda, a 51 year old patient who was suffering from fibromyalgia.

Miranda was treated with MAH, Major Autohemotherapy, and after each ozone treatment she felt a flu-like malaise which lasted several days. Once the malaise had passed, she would feel nearly free of fibromyalgia symptoms. This type of flare up came up after each successive ozone treatment, but would get progressively less. Until finally, she felt only an improvement after the ozone, without the previous herx.

This is indeed a textbook ozone herx. Some form of it is often experienced by ozone therapy patients.

Other ozone experts mention ozone induced Herxheimer reactions but say that they occur either very rarely, or are only a minor event which does not deserve much attention.

The reason for this may be that most ozone doctors primarily use intravenous ozone treatments which are less likely to produce Herxheimer reactions.

Another reason may be that ozone therapists often administer ozone together or in close proximity with anti-oxidants like Vitamin C or glutathione which are able to neutralize some of ozone's effect and also lessen any potential ozone therapy induced Herxheimer reaction.

How to do rectal ozone insufflation

Home ozone therapy – What is it?